We are Open and shipping orders daily!

Vangon Articles - Installing a Lithium Battery into a Vanagon

Installing a Lithium Battery into a Vanagon

So you want to put a Lithium Battery in your Vanagon?  That is a great idea! In fact, there is no downside to doing this except the initial cost of the Lithium Battery is much higher than the lead acid battery.  However, with proper charging and maintenance, a lithium battery has the potential to outlast your lead acid battery almost 10 times! So over the long run the price gets less and less until it becomes a better deal.  However that is only if you understand how to make your battery last.

What type of Lithium battery?

The first thing to consider is that not all Lithium batteries should be installed in a vehicle.  What you are looking for is one that has no danger of catching on fire and burning up your Vanagon.  At this present moment that version of the Lithium battery is the LiFePO4 battery.  It is a Lithium Iron Phosphate Battery.  This type of battery will not explode or catch fire.  However if you try to charge it at a temperature below zero, it can damage the battery.  Most of the time, you won’t be charging the battery below zero since it will be inside the van with you.  Also, many folks put the van away for the winter so they wouldn’t be using the van in the winter. However if you want to use the van in the extreme cold, there is a Low Temperature version of the LiFeP04 battery that we can sell you.  It actually uses the charging current to heat the battery cells to keep the temperature at an optimal level for charging.

Rated Capacity of the battery:

Lead Acid Battery.  All batteries have a rated capacity.  However with lead acid batteries this “capacity” is deceiving.  If you drain a lead acid battery, even a “deep cycle” and AGM battery below 50% of its rated capacity, you WILL damage the battery.  In other words, every time you run a lead acid battery until it goes below 50% it will shorten its lifespan significantly. So if you leave something on by mistake, the battery goes dead, expect that it will not last for more than a year or two and the capacity after the event will be less each time.

The lead acid battery is good, at most for 5 years.  Each time they are discharged and recharged the lifespan is shortened.  Even with optimal charging, you need to also monitor the electrolyte adding distilled water and checking this every year to be sure that the battery is well maintained to ensure it lasts for the full 5 years.

The Lithium battery lifespan is up to 10 times of the lead acid.  It doesn’t lose capacity with each recharge. Over time the capacity is very stable.  You should still have life in your properly charged Lithium battery ten years later. Perhaps longer.  The lithium battery also has a BMS (battery management system) that is like a small computer built into the battery.  It helps keep the battery from being damaged and extends the lifespan of the battery.

Lead Acid batteries want to be kept at near the top of their charge state as much as possible to keep from being damaged.  The way you charge them by bulk charging them to around 80% and then slowly taking them up to a full charge over many, many hours.  So even though your rated capacity could be 50 amp hours, and you have a 90 amp alternator, the battery is actually getting charged at only a couple of amps.  So it could take as long as a day or a day and a half depending on the capacity of your battery to fully charge the battery. The lead acid wants to be taken back to full charge before being used again because if it is not, it will damage and shorten the lifespan of the battery.

For the lithium battery, you can charge it very rapidly if you have a powerful enough charger.  We sell and recommend the Redarc 25 amp charger. It has a lithium charging mode, and can also integrate a solar panel.  I have measured 22 amps of charging in a stock Vanagon when running the alternator. If you are charging a 50 amp hour battery, that means a couple hours of driving it will get you a fully recharged battery.  Or if you apply a robust 110v charger to your main battery, it will charge the lithium via the Redarc when you are parked and plugged in. The solar panel, I have measured 5 amps with a 100 watt panel in full sun.  If you have more panels or a higher wattage panel you should see more amperage. But you could go for a hike during the day, and come back to a mostly charged battery with solar by the end of the day. Adding panels should just increase the amperage available which will allow the battery to charge even faster.  Also charging a Lithium battery to full charge is not a plus or minus. So whatever amount of charge you achieve, that battery is fine with it. So if it is a cloudy day and your solar panels get your battery to 75% or 85% charge, there is no issue. Yes you don’t have the full capacity you would have, but it doesn’t damage the battery in any way.

Lead Acid batteries are heavy.  Just try to move one and you will see.  Also they need to sit in an upright position because they are full of acid.  So they have a top, and a bottom and need to be installed accordingly. When they are charging, that are putting out hydrogen gas so the battery box needs to be well ventilated.  Think The Hindenburg except on a small scale.

Lithium batteries are much lighter.  Less weight means savings in fuel efficiency.  Also the battery has no acid electrolyte. It is a solid state battery with no liquid.  This means you can mount it in any orientation you wish. Also since there is no off gassing from the charging, there is no requirement to ventilate the battery box or worry about hydrogen build up.

You would think that this is the place where the lead acid battery would shine.  100 year old technology, mass produced, usually equals cheapness. And, on the surface, you would be correct.  However if you look at the long game you will find this argument quickly falls apart. The following is an example that I stole from another website but it works well to illustrate the false economy of the lead acid battery: 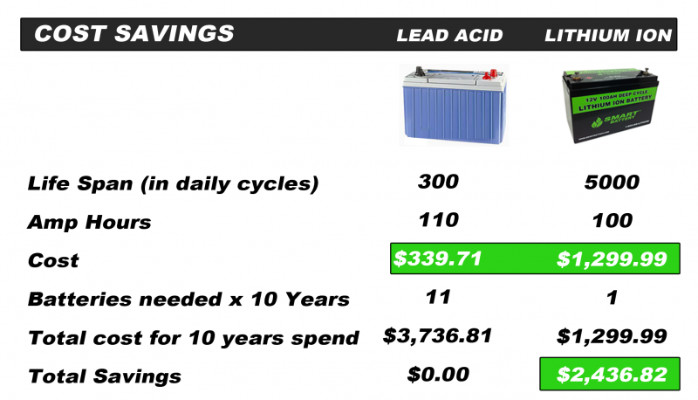 It is assuming that you are cycling the battery once a day for a year, but you can see that after a few short years a lithium battery starts to become cheaper than the lead acid.  That is on top of all of the benefits that we have already listed. We usually sell the ReLion 50amp hour battery due to the form factor. It can easily fit under the driver’s seat of a Westy or a passenger Vanagon.  If you don’t care about putting the battery inside a cabinet or under the rear seat you can install a 100 amp hour battery or even more than one according to your needs and budget. Yes the upfront cost is high, however, over the long run and with all of the benefits you see with the Lithium, well worth the investment.

The battery charger/isolator that I sell and recommend is the Redarc.  We sell a 25 amp or 40 amp version. I recommend the 25 amp for the stock Vanagon that has a 90 amp alternator.  If you have an engine conversion with a larger alternator with a higher output then you could get a benefit from the 40 amp version but if you don’t then I don’t think you will see any benefit from it.  The Redarc also acts as a battery isolator. That means if you have the Go Westy battery isolator installed or some other 2nd battery system, you will need to remove it. Instead the Redarc acts as an isolator.  If the main battery is below 13 volts (not being charged) the Redarc automatically isolates the 2nd battery from the main battery. It is a much more simple installation and much more efficient than the old school solenoid isolator that Go Westy sells.  The Redarc comes with a set of simple to follow instructions and I have an enhanced set of instructions that I can email if you have any questions.

Conclusion, I highly recommend a LiP04 battery with a Redarc charger.  The combination really can’t be beat. If you combine it with a solar panel or two, you should have years of use out of your battery system and lots of power for charging cell phones, tablets, lap tops, and lights at night.  After a long day hiking or exploring, you can come back to your van and enjoy a movie or read a book before hitting the sack. The perfect end to the perfect day.

You can find the batteries we sell at the links below:

The Redarc chargers are linked below:

Want to join the discussion? Feel free to contribute!

Wait - while your wishlist is updating...